The “1-A” lockup is one of the places belonging to IRGC, which has been built to torture protesters and political activists.

According to Human Rights in Iran website one of the MEHR Center projects, the Revolutionary Guards has been transferred political protesters and detainees to a place in eastern Tehran from 2016; the detainees were blindfolded, interrogated and tortured.

This secret lockup is located at the end of Hejrat Boulevard, near the Firoozeh Palace area.

You can see the entrance of this lockup in the picture below; according to the witnesses, this entrance is sloping and the officers remove the blindfolds of the detainees after passing the entrance. 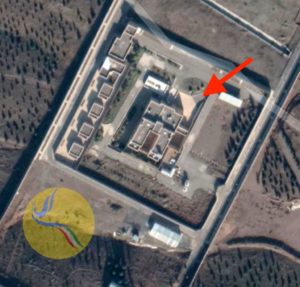 Citizens transferred to this lockup told Human Rights in Iran that this lockup has several floors, and in the basement, there are solitary confinement cells with a white wall more than 4 meters high, and public suites are located on the floors.

See the outdoor part of this detention centre in the photo below. In the middle of the vent, there is a pond covered with fences. 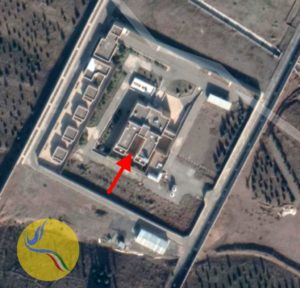 Detainees also said that “it is possible that this secret lockup was located in the compound of an administrative organization, because during the transfer, voices of people unaware of the situation were heard, and officers repeatedly threatened the detainees to silence us during the transfers.”

The entrance doors of the lockup are opened and closed with a smart key.

There is a room in the lockup where the confessions are obtained.

You can see the location of this place in the image below. 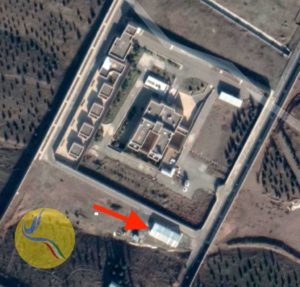 It is worth mentioning that a large number of the detainees of the protests in November 2019 and January 2020 have been transferred to this lockup for interrogation and forced confessions.

The confessions of several detainees against themselves, which were made under pressure from the authorities, have now led to their execution sentence.

Some are still facing physical problems after leaving the detention center, and deprivation of medical treatment in prisons has worsened their situation.

Types of mental and physical torture, such as beatings and prescription pills affecting their minds, have been applied to these detainees. Female detainees have also been subjected to sexual harassment and rape.

The IRGC’s Sarallah base has held several lockup centres in Tehran since the 2000s. Detention centres Qamar Wazarat, Nabovat, Seoul and Negative Four Interior Ministries are the names of a number of these secret lockups that have been used after each period of popular protests for interrogation and torture of citizens.