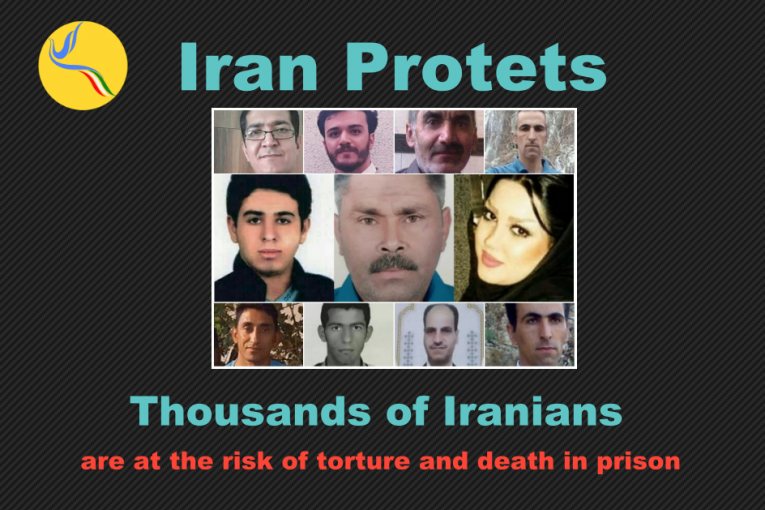 At least 14,000 protestors were arrested during November 2019 and January 2020; a large number of whom still held in detention without due process.

Human Rights in Iran Website reports many of the detainees of the nationwide
demonstrations during November and January are held in prison facing accusations such as “agents of rioting and unrest.”

Since November, more than 14000 protesters has been detained in Iran
They are at the risk of torture and death and kept under inhumane conditions

The November protests were followed by a wave of widespread arrests by the Islamic Revolutionary Guards Corps (IRGC) as well as the Basij militia. There have also been cases of citizens targeted based on personal conflicts whereas they had not participated in the demonstrations.

The dissidents behind bars are subjected to a pattern of physical and mental abuse such as severe beatings and being forced to consume medications for mental disorders. Some female detainees have additionally experienced sexual harassment and rape.

After being held a few weeks in custody, many women on temporary release continue to suffer post-traumatic physical and mental symptoms. In some severe cases, they were not even able to make verbal communication with their families for a few days after release.

In the provinces of Khuzestan, Kurdistan, and Fars, a large number of detainees are held in military camps – at least 500 in each. There are accounts of amputation in military camps experienced by some of the wounded detainees who were denied proper medical treatment.

The IRGC military camp, Hazrat Vali Asr in the province of Khuzestan holds scores of November protestors. The individuals released from that facility have described the condition of prisoners as “horrifying.” The guards shower the prisoners with water daily and subsequently beat them with hard objects.

Reports received from some of the detainees at IRGC garrison, Fajr in the province of Fars also indicate the alarming situation. They are repeatedly battered either in groups or individually every day. Some of them were sentenced to death on staged mock trials at the presence of other prisoners and were removed from their corresponding prison ward after as a means of psychological torture.

IRGC camp of Hazrat Nabi Akram in the province of Kermanshah also houses many of the November political prisoners who also experience daily beatings based on rapports. Due to overcrowding in this facility, many of them are deprived of decent sanitary and hygiene services as well as access to bathrooms.

The IRGC forces of Beit-al-Moqadas in Kurdistan have similarly transferred the political prisoners from all over the province to their military camps.

A large number of detainees in the IRGC camp of Saheb-al-Zaman in the province of Isfahan have also been reported in disconcerting conditions. The guards routinely beat them up while the authorities restrict their access to legal counsel or even a telephone.

The Human Rights in Iran Weblog has been informed by inside sources that due to an overflow of prisoners in detention centres and prisons, they suffer from a lack of adequate access to medical care as well as standard facility conditions.

At least 600 have been transitioned to this facility in the last two months. They are battered twice daily with batons and whips in the prison yard- once in the morning and once in the afternoon. Some of them are threatened to be executed at interrogations by IRGC agents.

A significant number of detainees at this facility are reportedly under the age of 20 who have been injured or wounded by shotguns or war weapons during the protests while being denied any medical treatment. These youngsters are reportedly placed in high-security units among criminals convicted of serious felonies.

Due to the lack of space, an increasing number of violent conflicts has been reported among inmates which threaten the lives of political dissidents there. Despite being aware of the crisis in the prison, the guards do not seem to have taken any action to stop or prevent them from happening.
Notably, the Intelligence agents have used savage torture to coerce confessions such as beatings to the genitals and pouring boiling water on prisoners.

The female detainees of the national protests in the province of Tehran are currently held in this facility while they are prohibited from having access to legal counsel or even from using the open-air yard hours. Additionally, a significant number of female prisoners who were previously arrested for not complying with the dress code of “Hijab” following the enforcement of governmental action plan against “corruption and prostitution,” are also held in the same facility.

Despite the maximum unit capacity of 100 in this facility, over 200 prisoners are placed in each unit while some have reached an alarming number of 600.

In the past few days, as Iranians continue to protest against the regime over the tragedy of the Ukrainian Airliner passenger flight 752 shutdown by a missile, 450 prisoners of unit 4 of Evin facility have been transferred to Tehran Central Penitentiary, known as Fashafuyeh prison to make room for hundreds of newly arrested protesters. In the women’s ward of this prison, many November detainees are also imprisoned who receive no medical care despite having severe health conditions.

Since the time of their arrest, the detainees’ visitation rights or contacting their families are restricted or completely prohibited.

The Basij militia forces reportedly have a warrant to monitor the activities of the families of prisoners by various means including installation of CCTV inside their homes.

Additionally, the intelligence forces are silencing the families by threatening to arrest them as well or execute the prisoners if they try to inform the press about their detained dependents.

These threats are not limited only to the families of prisoners of the November national protests but have been also extended to the families of the victims of Ukrainian plane crash incident. To deliver the bodies, intelligence agents have warned their families against giving interviews to the press especially to foreign media.

The families of the detainees who have contacted the local judicial centres to obtain information about the prisoners are reportedly responded by the officials that the authorities could hold them in prison for as long as they wish “even for 10 years,” or execute them and that they have no right to complain.

So far, 11 detainees have been tortured to death per reports. Their families have confirmed evidence of torture on their bodies including bruises and signs of severe strikes.

One of the victims of November mass arrests, Moradali Hosseini was detained in Qaleh Hassan Khan in the west of Tehran. After a few weeks in January, his family was informed that his body was found in one of the gardens of Shahryar.

Halimeh Samiri who was also arrested during the November protests was found dead near her house after a few days. Her closed ones have confirmed signs of beatings and torture on her body.

Hashem Moradi, Ershad Rahmanian, and Khaled Rashidi who were arrested during the November protests in Javanroud were also found dead in the outskirts of the city.

Nader Rezai Abtaf who was detained in Kermanshah lost his life under torture by intelligence forces.

Hamid Nazari, arrested during the November demonstrations, died due to a heart attack 24 hours after his release. His family have indicated that he had no history of a heart condition and he was injected lethal drugs while in detention.

Ghasem Bavi, another one of the November detainees in the city of Ahvaz was largely abused in custody causing him severe mental instability. He committed suicide a few days after his release from prison.

Sajad Esmaili, a 27-year-old resident of Ivan-Gharb in the province of Ilam, was arrested by the security forces on November 16 and his body was delivered to his family on November 30.

Kaveh Veisani from the village of Khamsan in the region of Kamyaran who was arrested by the security forces of Sanandaj and lost his life under torture. His body was found on Friday, December 6 in Babariz in the suburb of Sanandaj city with evident bruises and marks of torture.

Hamid Sheikhani was arrested on the first day of national protests in November in Shahrak Taleghani of Bandar Mahshahr and was later tortured to death by agents of security forces.

Siamak Momeni, also a November detainee, after being sentenced to 10 years in prison, attempted suicide on Saturday, January 5 at noon and was taken to the hospital from the Greater Tehran Prison.

Although the Islamic republic has a long history of taking the lives of political prisoners and prisoners of conscience in its penitentiaries, there has been a significant increase in recent years. The judicial system of the Islamic Republic also either directly or indirectly prepares the death bed for such prisoners.

Sattar Beheshti, a blogger and a dissident as well as Sina Ghanbari, a young protestor, have both been previously killed under profound physical and mental abuse while in custody. Some others including Akbar Mohammadi, Hoda Saber, and Vahid Sayadi Nasiri who went on hunger strike to protest against their unjust imprisonment, died due to lack of attention and medical care. Alireza Shir Mohammad Ali, a young political prisoner in Tehran Central Penitentiary became a victim of jail crime non-classification since he was intentionally placed in a high-risk prison level. He was stabbed to death by two other prisoners provoked by prison guards.

Iranian-Canadian citizens, Zahra Kazemi, a freelance photographer and Kavous Seyed Emami, an environmental academic were also among political prisoners who lost their lives during interrogations by the regime intelligence agents.

MEHR Centre warns the international community based on strong evidence that the Iranian political protestors currently in detention are under violent abuse and systematic torture. They are being held in poor living conditions with limited access to medical services. Before it is too late, the international organizations are urged to act on and stop such atrocities by instigating maximum pressure on Islamic Republic officials.