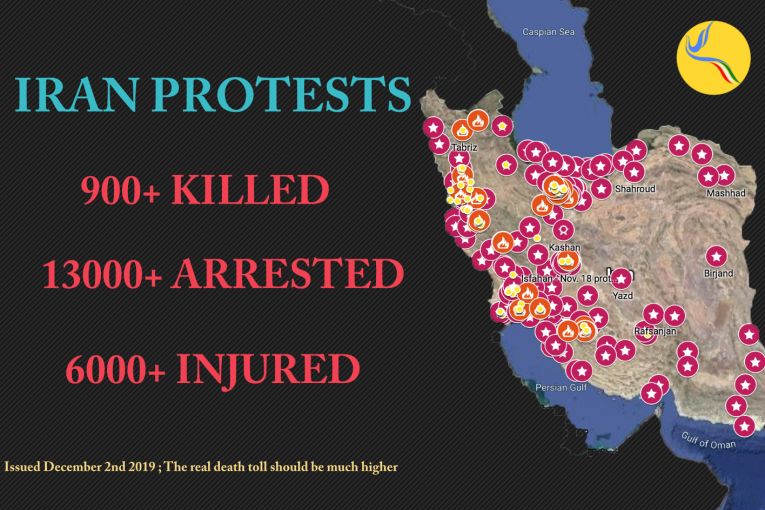 UPDATE: The estimated death toll of November national protests in iran has risen to over 1500 protesters, according to Reuters report on 23rd Dec 2019. The toll, provided to this news agency by three Iranian interior ministry officials.

The following statement has been published according to the reports by Human Rights In Iran on 2nd Dec 2019.

Over 900 protestors in the recent national uprising of November 2019 have been killed by the Iranian regime forces in twelve provinces of Iran while 6,000 wounded and 13,000 incarcerated are reported.

According to the reports by Human Rights In Iran weblog, following the nationwide protests of November 15 in 164 cities and regions in Iran, more than 900 protestors have been killed by security forces of the Islamic Republic through a brutal crackdown.

After the internet blackout partially lifted, new videos and insider accounts conclude the accounts of massacre in the provinces of Tehran, Alborz, and Fars about 250, 200, 200 respectively. The numbers, however, are on the rise.

Over 100 killings have been recorded by the city of Tehran. Bodies of at least 170 of the victims were buried in the public cemetery of Behesht Zahra while a mass of at least 80 were transported to other cities under threats of the security forces that attempt to obscure the true scale of the crackdown.

At least 166 corpses have been removed from 14 hospitals and health care clinics in the city of Karaj and carried outside of the city. The account of the street killings has been announced over 30 in this province.

There is an account of a deadly crackdown in the province of Fars, districts of Sadra and Mali Abad on Sunday night, November 17. Demonstrators gathered around the Friday Prayer Imam’s house were directly shot by snipers from inside a helicopter up above the roof which was there to pick up the Imam. Over 40 protestors were shot dead at the scene and the wounded taken to the hospitals. The medical personnel of Dena and Namazi hospitals have revealed around 50 of the critically injured protestors at their care lost their lives in the first 3 days of the unrest.

In Khuzestan, the security forces responded by opening fire on unarmed protestors. Majority of the casualties in this province belong to the cities of Mahshahr and Bandar-Imam. The local sources in contact with Human Rights In Iran have confirmed the death toll of at least 100 in Mahshahr alone. Eyewitnesses described how Islamic Revolutionary Guards Corp forces surrounded, shot, and killed a large number of protestors in a marsh where they had sought refuge. In the city of Ahvaz and its suburbs, the number of protestors killed by security forces is speculated at about 60 while in the city of Behbahan, it is around 20.

The reports received from Rezvan Garden Cemetery in the city of Isfahan indicate 30 bodies of the dissidents buried there. In the city of Yazdan-Shahr, 20 individuals have lost their lives during the brutal crackdown. It is said security forces of Isfahan opened fire on unarmed demonstrators using war ammunitions.

Bodies of at least 25 protestors have been removed from four hospitals. It is being confirmed that 22 number of the protestors were shot dead in the clash between the forces and people of Javanrud. It is witnessed that security forces were shooting protestors straight from the roof of the police station.

Youths and kids are being massacred in #Iran!

Local sources in the city of Sanadaj have informed Human Rights In Iran weblog that the number of casualties in this city is 49 while in Marivan, a death toll of 20 has been confirmed.

In the provinces of West Azerbaijan, East Azerbaijan, Kerman, Zanjan, and Chaharmahal & Bakhtiari respectively 8, 2, 1, 1, and 1 number of protestors were killed.

According to the sources, the families of the deceased have been repeatedly threatened and warned against speaking to the media. The memorial services of the political dead are either banned or being held under the presence of security forces who continuously threaten the attendees. Some families have been forced to pay for the cost of the bullets used to kill relatives or as compensation for destroyed property during the riots when returning the victims’ bodies. The amounts range from 40 to 70 Million Toman (approx. 10K to 16K USD.

An enormous wave of arrests started from the first day of outbursts and continues to rampage throughout the country. The security forces stationed in the hospitals and health care facilities arrested a large number of wounded protestors. Several news reporters, correspondents, and civil rights activists have also been detained for their involvement in the protests.

Based on the information provided to Human Rights In Iran weblog, approximately 13,000 people have been arrested. Some of the detainees are held at Revolutionary Guards Corp ‘Safe Houses’ under violent interrogations and tortures.

There are also reports of detainees having lost their lives at the jail in the city of Mahshahr despite being uninjured at the time of arrest.

At least 421 of the detainees at Gohardasht Prison in Rajayi Shahr are experiencing abhorrent conditions and torture. The detainees are reportedly beaten by batons and whips every day in the morning and early evening at the prison yard. A number of them are threatened to be executed during the interrogations.

Human Rights In Iran weblog would like to assert that the total number of casualties of national protests is “more than 900.” The number will be revised as soon as people in Iran are given full access to internet and other means of telecommunication.

There is a massacre going on right now. A wicked regime is waging war against its own citizens. This is sickening. https://t.co/68UHtJFlZ0