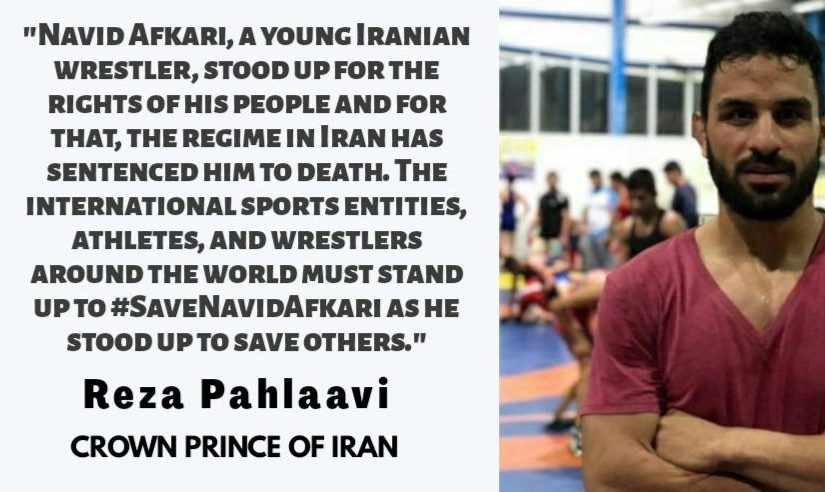 Update: #NavidAfkari, one of the defendants in the August 2018 protests was executed on 12 Sep 2020 morning and then he was buried in Fars province under strict security at night.

Navid Afkari’ mother: I ask for your help to prove the innocence of my children

Navid Afkari’ mother is desperately urging everyone who hears her to save her son’s life.#Navid_Afkari , a wrestling champion protesting against injustice and oppression in Iran, has been sentenced to Execution.

I’m Bahieh Namjoo, mother of Navid, Vahid, and Habib Afkari.
In July 2018, some agents in plainclothes entered our home at 5 am and took away Vahid and Navid.
After a while, they arrested my husband and my son-in-law. After 3 months they also arrested Habib.
My son, Habib, had just been married for 3 months.
They tortured him so much that he attempted suicide three times. But God saved him.
Afterwards, we found out that they were torturing Habib to make him confess against Navid.
They held up a superficial and unjust court session where my children could not defend themselves at all.
They made many accusations towards them without a single piece of evidence. They issued verdicts and the verdicts could be executed at any time now.
A verdict for Navid that I can’t even talk about (convicted to the death penalty). And 25 years in prison for Vahid.
Now, from all the people of the world, all the people of Iran, anyone who is hearing me, I ask for your help to prove the innocence of my children, to hold up a just and unbiased court.
I desperately ask for your help, whoever it is that is hearing my voice, for these unfair and unjust convictions.

The Voice of the Navid Afkari

Hello to the honourable people of Iran
Our latest shot at using the judicial procedures of Iran had no results, and they rejected our retrial request.
This means that after 2 years of pain and suffering we are all sorted out with the judicial system and I am going to be executed based on the judge’s unfair verdict.
No court has heard our voice nor has a justice-seeking judge. We had been silent until now only because of the hope for justice.
But from this moment on, I and my family need help. I am not only talking to [the people of] Iran.
My audience is any person who considers him/herself a human being and has any conscience.
Your silence means you support the oppressor and the cruelty,
it means supporting the execution of an innocent, it means me step-by-step approaching the gallows.
I had heard that an innocent man’s head comes close to the gallows but does not won’t be hung from it (an Iranian idiom).
But it is a lie. We are seeing they were all lies.
By the verdict of the judicial system of Iran, an innocent human named Navid Afkari is getting closer to the gallows every moment,
and if they shut down his voice and if he’s left alone they will take away his life and nothing would change.
Now I ask every justice-seeking free human with any religion and belief, to be the voice of me and my family.
Because human honor does not mean anything without supporting [and defending] justice and truth.
People, I am bound to protect my life as a human being and as a conscious person, {01:39.0}
and there exist evidence and proof for my innocence.
If I was executed, all the evidence we have gathered and all that I’m saying now is for everyone to know…
To know that an innocent human was executed in the 21st century with all the existing humanitarian organizations and institutions, the UN,… and all their expenses, even though he fought with all he had to make his voice heard.
Be aware that if I were executed as an innocent man, reason and logic would show that I have not been the first victim of the injustice of this bogusly just court.
We have tried in any language we know and any way we could.
We tried to make them aware that they are killing an innocent person.
Unaware that me and my family, from the day of the arrests, had entered a show created by some judges in a court where we were their puppets.
And now I do not have a tribune [or a way to make my voice heard], neither enough money to bribe.
All the power we have is the energy and the voice of the anti-cruelty liberal people.